Muteki no Giant (のジャイアント, Muteki no Jaianto, lit. Invincible Giant) is the representative team for Spain in the Football Frontier International in Inazuma Eleven Orion no Kokuin.

Spain is one of the favorites of the tournament. Their main force is their great physical ability and stamina, being able to overwhelm without difficulty any player who is not prepared for a physical confrontation. They also have formidable analysis and adaptation skills during a match, being able to change their plans. Despite all of those strengths, they still have some weak points. Due to their high physical ability, they force their way through defenses instead of avoiding them, and they aren't good against players that are able to maneuver around them like Asuto.

Muteki no Giant's uniform are a bit different to the traditional Spain's uniforms. Their jersey is mostly black, with yellow claws pattern on the shoulders. Around the waist, there is yellow triangle pattern along the sides. Their logo is red. The short is just a plain red short and they have yellow socks with an upper-black collar. The goalkeeper uniform is blue with yellow patterns along the shoulders and arms, with some claws patterns along the sides. The short is black and the socks too, but with an upper-blue collar.

Muteki no Giant in the opening.

The three teams gathered at the airport.

Group A standings during Inazuma Japan vs Perfect Spark.

Star Unicorn vs Muteki no Giant. 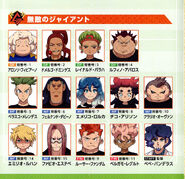 Muteki no Giant's headshot artwork.
Add a photo to this gallery

Retrieved from "https://inazuma-eleven.fandom.com/wiki/Muteki_no_Giant?oldid=829049"
Community content is available under CC-BY-SA unless otherwise noted.