It is used by Fideo in the anime as he ties against Endou by using it during the match of Inazuma Japan Vs. Orpheus, ensuring their seat in the finals.

But it didn't go so well when they fought Little Gigant as Rococo Urupa didn't even need to use a hissatsu to block it. While helping Endou train for his new hissatsu it is shown that his move improved over some time and that it has now evolved to Odin Sword 改, Endou can't seem to block Fideo's move but he keeps on trying. After seeing Endou is determined, he was able to evolve it to 真 Odin Sword. Afterwards Endou wasn't able to block it but he thanked Endou for the opportunity.

In Evolution, it was seen Odin Sword 改 lights the ball more shinier. In 真 Odin Sword, both the ball and the rune lights up more further.

In one of the game cutscenes, he can be seen using it effectively and scoring a point with it, sealing their seat to the Football Frontier International. Just like in the anime, it has the same story. Though in the game, you can equip some other characters with Odin Sword. Though in the game story, he is the one who originally wields it and he battles teams with his hissatsu.

It was used in the movie by Fideo and was used as a chain shoot with Kanon's God Cannon to score a goal against Ogre but was blocked by Zagomel's High Voltage. The way it was used, was different from both the anime and game.

Odin Sword in the movie. 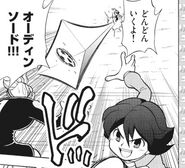 Odin Sword in the manga. 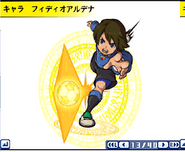 Odin Sword in the TCG.

Retrieved from "https://inazuma-eleven.fandom.com/wiki/Odin_Sword?oldid=834286"
Community content is available under CC-BY-SA unless otherwise noted.