Inazuma Eleven the Movie: The Invasion of the Strongest Army Ogre

Ogre (オーガ, Ōga), also known as Ogre Gakuen () is the main antagonist team in Inazuma Eleven the Movie: The Invasion of the Strongest Army Ogre.

Their team uniform consists of dark red T-shirts—the sleeves ending around the elbow—with dark purple and white patterns. This is fitted along with dark purple shorts, purple socks and red cleats. The goalkeeper uniform is a black long sleeved shirt, with blue and white patterns just like on the normal uniform that is fitted along with black shorts, white socks and black cleats.

Their second uniform consists of white T-shirts with dark purple and dark red patterns. The goalkeeper uniform is lime green and the marks are purple.

Their jerseys strongly resembles the uniforms of Teikoku, but darker.

They appear as the last team in Yuuka's lower route. All the members are at level 68.

They appear as the fifth team in Natsumi's route. All the members are at level 99.

Team Ogre appears as the main antagonist in Inazuma Eleven the Movie. They are a team from 80 years in the future and come with the mission of destroying the Raimon Soccer Club. After seeing that Kageyama's plan to destroy Raimon had failed, the leaders of Ogre School decides to send the team to the past. They first appears during the semi-final match of Football Frontier against Zeus, where they win by the score of 36-0, proclaiming latter "We're ogres that ate even the gods".

During the match against Raimon they pass the first half without attack, only stealing the ball when Someoka or Gouenji would receive them, but after some seconds they give the ball back to Raimon's players.

Ogre in the game.

Ogre in the ending credits. 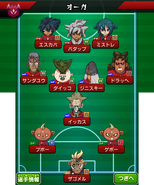 Ogre's formation in the Galaxy game.

Ogre's artwork.
Add a photo to this gallery

Retrieved from "https://inazuma-eleven.fandom.com/wiki/Ogre?oldid=819399"
Community content is available under CC-BY-SA unless otherwise noted.