Start a Wiki
This article requires some cleanup (spelling, grammar, formatting) or improvement (missing additional information). You are welcome to help by editing this page. Please follow the guide to character articles.

Okuiri Hiro ( ) is a midfielder of Inakuni Raimon. He previously played for Inakuni before it got disbanded.

Okuiri has dark blue hair with his bangs parted with a loose strand and purple eyes. His skin is fair and he also wears round glasses.

During the match between Inakuni Raimon and Teikoku Gakuen, Okuiri was one of the players who decided to move up after seeing Teikoku's plays. When Sakuma Jirou used Koutei Penguin 2gou with Fudou Akio and Jimon Daiki in the second half, he, Hattori Hanta and Hiyori Masakatsu used Gravity Cage to successfully stop Koutei Penguin 2gou. In the end, Inakuni Raimon was able to win from Teikoku Gakuen with 4-3.

In the final between Inakuni Raimon and Outei Tsukinomiya, he developed an individual hissatsu called The Labyrinth.

Along with the rest of his team, Okuiri was present when Inazuma Japan was announced but he wasn't selected as a member.

He appeared later during the surprise party prepared for the members of Inazuma Japan, before they left to Russia for the FFI tournament.

Sometime after the FFI, he and Inakuni Raimon members transferred back to Inakuni and competed in the Football Frontier Autumn Tournament. They were going to start a match against Raimon at the end of the series. 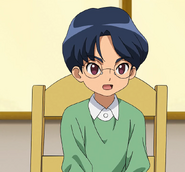 Okuiri in his casual clothes.

Retrieved from "https://inazuma-eleven.fandom.com/wiki/Okuiri_Hiro?oldid=834439"
Community content is available under CC-BY-SA unless otherwise noted.