He has tanned skin tone and is a bit tall in height. He has shoulder-length, red-brownish hair which is mostly sided on the left and covering his left eye, while the right side is shaved. He also has thin eyebrows and a double-colored eyes with orange and sky-blue.

In contrast to Red Bison's and Shining Satans' disciples of Orion, Onakhon is not a harmful player. But he exploits the advantages given by the Orion Foundation such as unpartial referees to win. He seems calm at the first glance but he tends to get on his nerves quickly when things doesn't happen like he expects, like when he tried to cancel the third goal of Inazuma Japan because they used a dangerous tactic.

Onakhon is part of the Orion Foundation. He's the captain of his national team as well as the defensive leader of his team. Against Inazuma Japan, he didn't had to eliminate any player in the first-half because of the Uzbekistan's domination in terms of play. He  managed to clean many balls off the feet of Japan's players and two of his cleanses resulted in two goals for Eternal Dancers in first-half. But everything changed in second half and the entrance of Nosaka Yuuma. After Inazuma Japan equalizes 2-2 under Nosaka's impulsion. Onakhon along the rest of the team started to play more roughly towards Nosaka and the rest of Inazuma Japan with the complicity of the referee. They didn't manage to score in their strong time because of Nishikage Seiya's new hissatsu, Artemis Ring. After, Nosaka unleashed Grid Omega version 2.0 as a revenge against the methods used by Uzbekistan, and scored another goal while nobody could move because of the freefall. Onakhon called it cheating and tried to cancel the goal but the referee has changed between for a unbiased one, resulting of the goal being validated. In the last minutes of the match, Onakhon along the rest of the team tried to unleash an ultimate counter-attack with its hissatsu tactics Eternal Run. But being too tired because of Japan's tactics and pressure during the second-half, they couldn't manage to keep the effort and Onakhon got the ball stolen by Nosaka. He could just observe Alek Akbar took a fourth goal, sealing definitely Uzbekistan's defeat 4-2. After the match, he seemed affected by the defeat and Dost Gales' reflexion about the football they lost, probably because of the Orion Foundation orders. 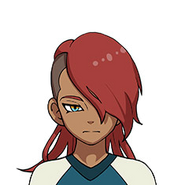 Retrieved from "https://inazuma-eleven.fandom.com/wiki/Onakhon_Ims?oldid=829632"
Community content is available under CC-BY-SA unless otherwise noted.