In the alternate timeline of Inazuma Eleven Ares no Tenbin he retains his role as a defender for Teikoku Gakuen.

He has a strong and quite muscular body which makes him a strong defender. He is very tall and has tanned skin. He has curly black hair (dark purple in Ares) and wears a gray cap with goggles attached to it that cover his eyes.

His team lost in the Football Frontier preliminaries finals to Raimon by a score of 1-2. In the Nationals, his team was crushed by Zeus 10-0.

He once again played with his team in the Football Frontier against Raimon. He was angry at Shimerigawa when the latter wanted to have Sakuma's captain armband. After Shimerigawa ordered the defenders to stop Raimon's shoots when all of them tried to attack at the same time, Oono, along with Narukami and Banjou tried to stop their shoots with their bodies. They stopped all of the normal shoots, except Asuto's, who used Inabikari Dash to get past Kazemaru. In the end, his team lost with a score of 3-4.

Oono appeared in episode 21 when Kazemaru and Fudou Akio visited Teikoku Gakuen before the departure to Russia, for the FFI tournament. 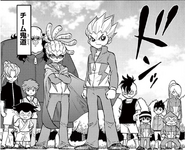 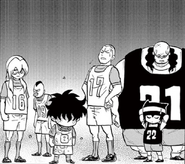 Oono Densuke accepting Domon into Teikoku.
Add a photo to this gallery

Retrieved from "https://inazuma-eleven.fandom.com/wiki/Oono_Densuke?oldid=847428"
Community content is available under CC-BY-SA unless otherwise noted.