Ootani Tsukushi ( つくし) is the manager of Inakuni Raimon. Before Inazuma Eleven Ares no Tenbin, she was a scout character.

She is also the manager of Inazuma Japan in Inazuma Eleven Orion no Kokuin.

Tsukushi has shoulder-length, light brown hair with the bangs swept to the right side and light brown eyes. She wears Raimon's standard school uniform, with a ribbon which is blue in the original games and green in the Strikers games and Ares no Tenbin series.

In Inazuma Eleven Ares no Tenbin, she is usually cheerful, happy and friendly. She also has a lot of knowledge about the current rules of the Football Frontier Tournament and in the first episodes she acts like a guide to Inakuni Raimon when they were still newbies.

In the Fire version of the game. Ootani can be scouted when you are told to find a way to Hakuren Junior High in Chapter 3 of the game. To find her go to Northern ridge and then to the small pathway to Hakuren, near the tree. Talk to her and she will join your team.

In order to recruit Ootani, the following requirements are needed:

After this, she can be scouted for an amount of 350 Kizuna points.

In order to recruit Ootani, the following requirements are needed:

Tsukushi holding her breath due to the tension of the match. 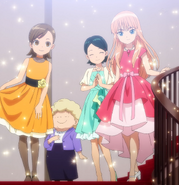 The girls and the grandmother joining the party with their beautiful dresses.

Ootani and Anna reading about Russia.

Ootani and Anna at the end of episode 24.

Retrieved from "https://inazuma-eleven.fandom.com/wiki/Ootani_Tsukushi?oldid=834449"
Community content is available under CC-BY-SA unless otherwise noted.