Protocol Omega first appeared in episode 1. Their captain, Alpha, met Matsukaze Tenma in his era, and told him soccer had been erased, and that he was the only vestige of it. Tenma didn't understand and asked if he was responsible of Raimon's players' attitude, which Alpha said he had done it. Tenma wanted him to undo it but Alpha teleported him using a Sphere Device.

Alpha and Tenma reappeared in the past, at the moment when he was saved by a soccer ball. To avoid it, Alpha deflected the ball that Gouenji shot to save Tenma. Thus, his feelings for playing soccer were diseappearing, but he resisted. Alpha teleported him at a field to convince him to stop soccer and made his team, Protocol Omega, appear. They started shooting to Tenma so he would understand how soccer harms, but suddenly, someone arrived and stopped Alpha from shooting a last time.

He revealed him to be Fei, and said to Tenma he wanted to protect soccer as he thinks it is a precious thing. He duplicated himself into Duplis to play against Protocol Omega and called the newly-made team Tenmas. The match started with Tenma shocked while looking to how they were playing. However, Fei said he didn't get used to their style of play so far, and showed they weren't that good as he got the ball. The two teams' level were equal, until Alpha used his Kehin, Tenkuu no Shihaisha Houou and fused with it to create an armor. Tenma became surprised again and Fei said it was Keshin Armed. Using his Armed, Alpha easily scored a goal. At the end of the episode, Fei said to Tenma he was waiting for something to come, and the Inazuma TM Caravan appeared. A bear appeared, seen to be driving it.

The match continued in episode 2. Clark Wonderbot appeared and said it was impossible to win without a coach such as him. As Tenma didn't understand and looked to the Dupli, Fei made them disappear and explained they were copies of him. The match finished 2-1 with Raimon winning by give up.

In the same episode, they played another time against Tenmas, this time to prevent the creation of the Raimon's soccer club 11 years ago by Endou Mamoru. They failed because of Tsurugi Yuuichi's arrival and lost the match 2-0.

In episode 4, they played against Raimon but lost again this time 1-0, due to Yuuichi's Mixi Max with his brother.

They were replaced by Beta and Protocol Omega 2.0 in episode 5, as they weren't able to stop Tenma, Fei and the others from changing the timeline back to it normal. Though, most of their members joined Protocol Omega 2.0, except the most important, Alpha, and three others members: Jini, Kual and Netan. 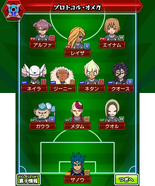 Character designs of Protocol Omega's members.
Add a photo to this gallery

Retrieved from "https://inazuma-eleven.fandom.com/wiki/Protocol_Omega?oldid=766815"
Community content is available under CC-BY-SA unless otherwise noted.