Protocol Omega 3.0 first appeared in the episode 18. As Beta and some others members of Protocol Omega 2.0 were sent to the MUGEN Prison, Gamma replaced them with four new members called Galling, Rujiku, Dhanna and Bahamusu. They time traveled to Jeanne d'Arc's era, at 1427, and met Zanark Avalonic. Einamu said he is a S-Rank criminal, and Protocol Omega 3.0 then started to shoot with the Sphere Device in strike mode to him, but it didn't affect him. Then, a purple ray which came from Zanark's mouth beat all the team, letting them inconscious. He started talking to Toudou Heikichi and the others El Dorado leaders and made a trade; Raimon's destruction by a clean slate. After that, Zanark took them under his control by using a blue ray coming from his mouth again. When they were under control, their skin has turned into the same color as Zanark's skin color.

In the episode 19, Protocol Omega 3.0 trained in a forest under Zanark's command. He asked them if they could beat Raimon, in which they answered they would be able to with Zanark's power.

In the episode 20, Zanark brought them to the top of the castle and stopped Raimon, saying to them there are two ways to pass by: beat Protocol Omega 3.0 in a match or swimming, although they wouldn't permit the second. Then, the match began. Protocol Omega 3.0 took the lead first because of Gamma's keshin, Jinrou Lycaon. The episode ended with 1-0.

In the next episode, Kirino who had summoned his keshin, Senkishi Brynhildr, Mixi Maxed with Jeanne d'Arc. Raimon was able to tie because of Tsurugi's scoring. Later, Shindou made a Mixi Trans and scored the second goal with Setsuna Boost, giving Raimon the victory 2-1. After the end of the match, Zanark sent Gamma and the others away and left. 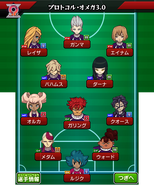 Retrieved from "https://inazuma-eleven.fandom.com/wiki/Protocol_Omega_3.0?oldid=766807"
Community content is available under CC-BY-SA unless otherwise noted.