Racerit has messy blond hair with two strands that resemble horns. He has blue eyes with ligtning-shaped pupils and light skin. He also wears a green and red headband.

Racerit replaced Gabriella Amati as Italy's goalkeeper when she was injured from stopping Inamori Asuto's Sunrise Blitz. Gouenji Shuuya approached the goal and used Fire Tornado which Racerit was able to stop with Tricera Shield thanks to his supporters. Kozoumaru Sasuke later shot with Last Resort which he wasn't able to stop with his technique but it didn't score a goal since Petronio Patti countered it with Last Resort D. However, Inamori Asuto, Haizaki Ryouhei, Nosaka Yuuma, and Ichihoshi Hikaru countered Last Resort D with their own Last Resort, Last Resort Σ, which scored the second goal for Japan. Since Italy was unable to continue, they forfeited the match. 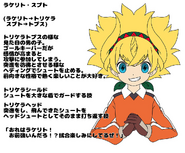 Racerit Spot's Design.
Add a photo to this gallery

Retrieved from "https://inazuma-eleven.fandom.com/wiki/Racerit_Spot?oldid=809758"
Community content is available under CC-BY-SA unless otherwise noted.