This article is about the school of Raimon. For other uses, see the Raimon (disambiguation).

Raimon was first seen when Endou arrived their for the first time. Endou was the person who re-created the soccer club, as the school stopped the club a long time ago. At the start, he was the only member to be in the club, but then Handa and Someoka joined as the first members. After a year, the next first years joined (Kabeyama, Kurimatsu, Shourinji etc.). The principal said to Endou that they are playing against Teikoku Gakuen soon, and if they lose against them, he will stop the club. Endou was short for members, so he gathered four more. In the end, they won against Teikoku Gakuen as they forfeited the match.

In episode 4, Raimon had a practice match against Occult and won 4-3 against them thanks to Someoka's Dragon Crash scoring twice and also Dragon Tornado twice with Gouenji.

After Raimon won the Football Frontier by beating Zeus, Aliea Gakuen destroyed the Raimon School, devastating every building of the school.

In season three, Raimon was re-built, as it had been destroyed in season 2 by Aliea Gakuen. It got a new design. In episode 68, Team A played against Team B to determine who was going to play as Japan's representatives in the Football Frontier International. After the match ended in episode 69, Inazuma Japan was born, and there adventure had begun to be the best youth soccer team in the world!

Ten years later from when Raimon won the FFI, Matsukaze Tenma, the main protagonist of the Inazuma Eleven GO series was introduced and appeared at Raimon's school, which had changed again.

In the Chrono Stone series, Raimon first was different from the original one in GO. There were no more stadiums of soccer, and a lot of sports had replaced it. As the school returned to normal along with the members of the soccer club, soccer got banned by Zaizen Sousuke because of the match opposing Japan to U.S.A. Everyone and everywhere was banned to play soccer because of El Dorado.

Later in episode 39, after Raimon won against Perfect Cascade and El Dorado made back the story of soccer back to normal.

Note: In the original series, the players played on a soccer pitch outside of the school building, but in GO and Ares no Tenbin series, they now have a stadium.

The whole of Raimon school in the game.

The new Raimon shown in season 3.

The soccer building being demolished. 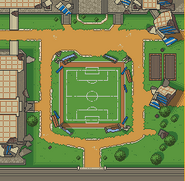 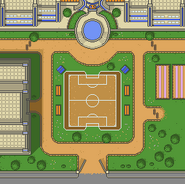 Inakuni Raimon's soccer club room.
Add a photo to this gallery
Retrieved from "https://inazuma-eleven.fandom.com/wiki/Raimon_(school)?oldid=836476"
Community content is available under CC-BY-SA unless otherwise noted.