Rococo Urupa (ロココ・ウルパ) is one of the supporting characters in Inazuma Eleven's third season. He is the captain, goalkeeper and a temporary forward of Little Gigant. In Inazuma Eleven Chou Jigen Dream Match, he is the reserve goalkeeper for Inazuma Battle Eleven.

Rococo has tanned skin and is tall in height. He has dark-bluish black hair with two parts of his hair that curve into his cheeks and two above that curve into each other. He also has black eyes with a noticeable eyelash in each.

When Rococo was young, he was trained by Endou Daisuke and kept on persevering unlike the others and followed Endou Daisuke's orders. Daisuke taught Rococo some moves that he taught to Mamoru too.

He is generally a very happy-go-lucky person but at times of adversity, he can get very serious. He is like a grandson to Endou Daisuke and develops an emotional attachment to him. He is also shown to be quite jealous at times, as proven in Inazuma Eleven 3: Sekai e no Chousen!!, where he felt frustrated that Daisuke planned to go back to Japan with Endou Mamoru, but later learnt to ease his feelings. He is also shown to be heroic at some points as he went back to resuce children when Team Garshield attacked the Cotarl area.

When Rococo was younger, he was the weakest player on his team, coached by Endou Daisuke. He was slow at running, and fell often. In response, Daisuke gave him the training to become a goalkeeper of his team instead. The tire practice, at first, was very hard for Rococo; he would be knocked backwards easily as the tire swung towards him. As he grew, however, he was able to stop the tire and become stronger and better as a goalkeeper.

Daisuke also revealed that he specifically chose Rococo for the goalkeeper position because of Rococo's eyes: they always looked spirited, and seemed like the eyes of a soccer fanatic.

At a young age, Rococo was bullied by others. One day, he was given a ticket by a friend, to see a match of which Levin Murdoch was going to play in; who Rococo was a great fan of. His ticket was stolen however by the bullies and Rococo was devastated. The actual Levin Murdoch came to Rococo himself and told him about how he was also bullied as a child. He then told Rococo that he had the look of a world-class player and that he should train to be the best in the world.

After this, Rococo searched for an old man who knew 'all the secrets of soccer', so that he could train Rococo to become the best goalkeeper in the world.

His first appearance was in episode 68 when he asked his coach when will he be able to fight against 'him', to which his coach said, he will have a chance to play against him soon (at the top of the world). Afterwards he is seen in the truck which Daisuke was driving and after he saw Endou, he asked whether he is the person. Then, he reappeared again with his coach because Natsumi had something to say to Endou, while telling Endou how he, with the help of Daisuke, became stronger. It was revealed that when he was young, he was bad at soccer and didn't have a never-give-up attitude. But after listening to Daisuke's words, he decided to train harder and become a goalkeeper and started training with tires.

Then his team and the people of the Cotarl area got attacked by Team Garshield. Because most of his teammates were in bad shape including him, as he injured his left shoulder while saving a young boy from getting hurt, so they weren't able to fight Team Garshield. Instead, Inazuma Japan helped them, to which Inazuma Japan wins. He was glad to see that everyone was okay.

Before the match between Little Gigant and Inazuma Japan, he went to do the tire practice, where Endou used to practice on the beach and he told Endou about his past when he was trained by Daisuke. He then told Endou to see who will win the match, whether it is me, who is directly trained by Daisuke, or you, who read his book and trained yourself. Later he used God Hand together with Endou to stop a tire from hitting Natsumi when it got out of control and then Endou found out how strong Rococo is because though Endou used God Hand first, they caught the tire at the same time.

Then, after a day or so, Rococo had to face Inazuma Japan in the World Tournament. He used God Hand X and was able to block Gouenji's 真 Bakunetsu Screw, Someoka's Dragon Slayer V3 and Hiroto's Ryuusei Blade V3, but Hiroto's Tenkuu Otoshi made through his technique. In the second half he was switched to be a forward and he scored agoal using X Blast, breaking through Endou's mastered God Catch. Later he returned as a goalkeeper due to Cain Saito being injured. Then he used Tamashii The Hand to catch Big Bang, which was much more powerful than God Hand X. But Tamashii The Hand G2 was broken by Jet Stream. In the end, his team lost. He is last seen at the departure airport with Fideo and Endou, the three of them saying their goodbyes.

In the Ogre, when Endou is reunited with his grandfather, The Ogre from the future made Rococo think that Daisuke is going back with Endou to Japan. Kanon tried to stop them but result got him abducted. He went to Endou with a mind of crushing him during the match between Little Gigant and Inazuma Japan but when he see Endou personality he changed his mind about him and in result Endou Daisuke went back with him to Cotarl.

After this, he can be scouted by an amount of 4550 Kizuna points.

After this, he can be scouted for an amount of 3400 Kizuna points.

Rococo using God hand at the same time as Endou to protect Natsumi.

Rococo when he was younger.

Rococo being trained by Daisuke. 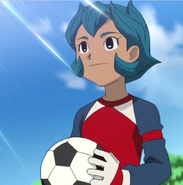 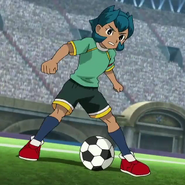 Rococo playing as a forward.

Rococo in the TCG (2).
Add a photo to this gallery

Retrieved from "https://inazuma-eleven.fandom.com/wiki/Rococo_Urupa?oldid=825034"
Community content is available under CC-BY-SA unless otherwise noted.