They were first introduced as Earth Eleven's first opponents in the Grand Celesta Galaxy tournament.

Before the match started in episode 22, the captain of Sandorius Eleven, Kazerma Woorg, promised to Earth Eleven that they will fight fairly, even though the loser's planet would be destroyed. However, most members of the team let Barga Zachs join the team to help them win because they wanted to protect their planet, thus putting their pride behind. During their game against Earth Eleven, most of Sandorius Eleven' members followed Barga's orders to play roughly and injure Earth's team. However, after seeing Kazerma's desperate plays and listening to his and Badai Jaran's words, they understood that their pride was more important to them. At this point, Barga left the field in frustration as no one on the team listened to him anymore. Sandorius Eleven then continued playing against Earth Eleven but unfortunately lost with a score of 3-2. 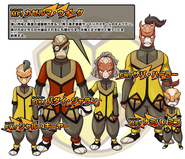 Sandorius Eleven's formation in the second half. 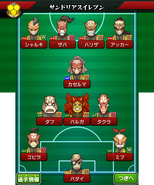 Sandorius Eleven's formation in the game.
Add a photo to this gallery

Retrieved from "https://inazuma-eleven.fandom.com/wiki/Sandorius_Eleven?oldid=796353"
Community content is available under CC-BY-SA unless otherwise noted.