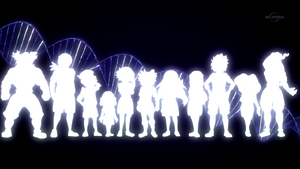 Second Stage Children (セカンドステージチルドレン, Hyper-Evolved Children) is the name given to children possessing various psychic powers and increased physical abilities; their psychic powers include things such as levitation or telekinesis. A Second Stage Child is created by the presence of the SSC gene (Second Stage Children gene), a form of gene mutation that began in the DNA of strong soccer players around 200 years prior to the current Second Stage Children, as seen in cases such as Matsukaze Tenma. Though the presence of their psychic abilities may seem positive at first, there is a large side effect of the SSC gene, it greatly decreases the lifespan of those carrying it, limiting their lives to only around 20 years.

When the current Second Stage Children began to appear they were not accepted by society and cast out for their differences, leaving many with a hatred towards normal humans. Eventually one of these children, Saryuu Evan, formed a group called Feida to unite many of the Second Stage Children against humanity and take over the world. Following the events of the Inazuma Eleven GO Chrono Stone series in which they appeared, most of the Second Stage Children from Feida, including Saryuu Evan himself, accepted a vaccine created by El Dorado to stop the SSC gene's effects. Those who received this treatment had their potential lifespans increased to that of normal humans, but their superhuman abilities were also nullified in return.

At the end of the movie, a cliffhanger was shown. Senguuji Daigo and Ishido Shuuji were seen in a place showing the God Eden. Senguuji started talking about children whose power reached a high stage so high, beyond human limits; the Second Stage Children. He said some of these children already existed in this era, and that the true goal of the Fifth Sector was to find children having a such power, as the Helper X ordered them to do. Then, he made Ishido the Holy Emperor, thus giving him the task to find such children.

Second Stage Children were mentioned for the second time in episode 2 by El Dorado's leaders. Most of them are part of Feida, an organization which is currently in a war with El Dorado. Toudou Heikichi said Second Stage Children are descended from talented soccer players, which is the main reason why El Dorado wants to eliminate soccer, so that they can stop the war opposing them to Feida.

It was said by Gouenji in episode 7 that he and Senguuji Daigo, with the help of the Helper X, created the Fifth Sector in order to find children who are able to suppress their time, so more children would join Feida. In return of, Helper X gave them a financial help for their organization. Then, Gouenji said Tenma is one of these children.

Later in the anime, at the end of episode 25, a mysterious white-bearded figure said to Zanark, after he suddenly "exploded", that his power was on the verge to awake into the one of a Second Stage Children.

In episode 34, the Feida's Second Stage Children physically appeared for the first time and entered El Dorado's headquarters. One of the leaders said the mysterious boy was SARU, Feida's leader and emperor. He was accompanied by the mysterious white-bearded man and others members of the organization.

In episode 39, Toudou Heikichi and Sakamaki Togurou explained to Raimon their true intentions. They made the story of soccer back to normal in Raimon's era, but Sakamaki said the Second Stage Children have Endou Mamoru's Chrono Stone. As Raimon's players were saying they could save Endou Mamoru themselves and that they wouldn't team up with El Dorado, Toudou told them what was happening in their era.

Firstly, he said El Dorado is in a war against Feida. He explained to them Second Stage Children's DNA has a gene called SSC. It makes them have an incredible intelligence and extraordinary physical abilities. Some of them are telepaths and their senses are higher than human's ones, who couldn't have Second Stage Children's powers.

However, one year ago, an organization called Feida, made up of Second Stage Children, started a war against El Dorado to control the whole world. Hearing this, Shindou asked why Feida started a war. Toudou answered they wanted to be world leaders to create a world which would belong to them. He added their existence was the symbol of the revenge they wanted to take against the ones who could not accept them as they are.

Sakamaki added Second Stage Children can't become adults because they die when they're about 20 years old. So, they want to rule the world before dying. Consequently, El Dorado has to use all its power to fight against Feida, so the world would not be controlled by them. Their intentions are to create a world where only Second Stage Children would live in, so the humanity would completely disappear. After explaining this to Raimon, Toudou said they have to team up with El Dorado to fight against Feida in Ragnarok, a tournament in which 3 soccer matches will be held to decide who would rule the world.

In episode 40, Vanfeny Vamp and Garsha Wolfein made their appearance, saying it finally was Ragnarok. Garsha added Feida shall win. Then, Saryuu appeared, but Vanfeny and Garsha didn't cheer him to win Ragnarok and were cold with him. They couldn't help him as they were occupied with something else. As they left, Saryuu said they would never change.

In episode 41, Fei scored an own goal during the first match of the tournament. He was later revealed to be a Second Stage Children and to be part of Feida, which shocked Tenma. Saryuu Evan had erased his memories and sent him to help Tenma, so Fei would protect soccer.

Near the end of the episode, the three El Dorado teams captains and coaches were seen with Toudou Heikichi. He told them El Dorado's institute of science had found a vaccine to cure Second Stage Children and erase the powers they are given by the SSC gene. However, Sakamaki added Feida's members would not take the vaccine as the only thing which preoccupied Saryuu was to rule the world.

Retrieved from "https://inazuma-eleven.fandom.com/wiki/Second_Stage_Children?oldid=851981"
Community content is available under CC-BY-SA unless otherwise noted.