Seok Min-Woo (ソク・ミンウ, Soku Minu) is a midfielder and captain for Red Bison.

Seok is a reasonable and competitive player. When he noticed that Baek Shi-Woo, a player with the mark of Orion, was taking harmful and risky measures to win, he himself went up to Baek, and assertively told him not to do that. This shows that Seok enjoys fair plays, and does not want to hurt others.

Seok played a midfielder and captain for Red Bison in their match against Inazuma Japan. After Baek Shi-Woo was stopped by Fubuki Shirou's Ice Ground, Seok got the ball and he, Baek and Lee Dong-Hyeok used Tokkou Buffalo Train to get past Hiura Kirina. Baek received the ball but he failed to score a goal with Red Break since it was stopped by Kazemaru Ichirouta's Spinning Fence and the trio, who used Tokkou Buffalo Train, were surprised that the technique didn't score. After that failed attempt, Red Bison's coach, Cha Un-Su, gave orders to use rough plays to stop Inazuma Japan's plays and Red Bison managed to get the first goal after Baek scored with Bison Horn. However, Inazuma Japan used their tactics, Juu to Gou, and Gouenji Shuuya was free in front of Red Bison's goal. Seok said to Shin Rae-Won to stop Gouenji's Last Resort but he failed to do so with Fire Wall, causing the score to be tied 1-1 for the first half.

During the half-time, he focused his attention on the behaviour of Baek, Lee and Park Ji-Won. Right after the beginning of the second half, he wasn't able to steal the ball from Kira Hiroto. After Red Bison conceded their second goal and Cha's order to bring Hiroto down, Seok started to clench his fist by anger. He later used Tokkou Buffalo Train again to get past the whole Inazuma Japan's defense, successfully hurting some players unlike the first time. The following action permitted Red Bison to tie the score but Seok went to Baek just right after and pulled his shirt, revealing Baek's Orion mark on his shoulder. A few minutes later, after a backpass of Baek in Seok's direction, Lee pushed him roughly. Seok lost his balance and then Park gave him a knee kick in the stomach. The violence of the hit was so hard that Seok was unable to finish the match and got replaced by Son Min-Soo for the remaining minutes left. 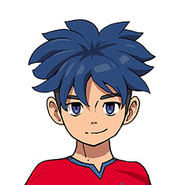 Retrieved from "https://inazuma-eleven.fandom.com/wiki/Seok_Min-Woo?oldid=822960"
Community content is available under CC-BY-SA unless otherwise noted.