The team jersey is red with large white stripes, and a white collar as well. The shorts are plain solid red, and the socks are black with a thin yellow stripe on the top. The cleats are light gray with a darker bottom. The captain's armband is yellow. The goalkeeper's uniform is a green shirt with yellow sleeves and a white collar. The shorts are also green, and he has white gloves with black lightning symbols on the back.

Four members of the team tagged with names.

Shinsei Inazuma Japan in their jackets.

Shinsei Inazuma Japan not giving up and tried to stop Fran's Chaos Meteor. 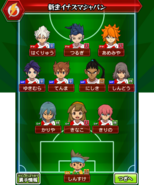 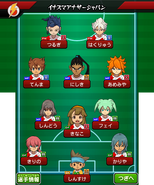 Retrieved from "https://inazuma-eleven.fandom.com/wiki/Shinsei_Inazuma_Japan?oldid=825421"
Community content is available under CC-BY-SA unless otherwise noted.