Suzuno Fuusuke ( ), also known as Gazel (ガゼル, Gazeru), was a forward and the captain of Diamond Dust, and a forward of Chaos. Later on, he became a forward of Fire Dragon.

In the alternate timeline of Inazuma Eleven Ares no Tenbin, he is a forward for Eisei Gakuen.

Suzuno has light-gray hair that is pointed towards the left and teal-colored eyes. He has fair skin and a slender body. He tends to pull up the sleeves of his uniform. His normal clothes consist of a purple jacket, light blue shirt, brown pants and a pair of dark brown sneakers.

In Inazuma Eleven Ares no Tenbin, his skin tone is paler.

Usually he is calm, arrogant and is overconfident about his own skills. He's also a genius and talented soccer player, and tends to comb his hair with his fingers, an action similar to Afuro's. His personality is the opposite of Nagumo Haruya's. However, when he was in Fire Dragon, he grew less arrogant and more friendly, shown when he greeted Inazuma Japan before the match, where he changed his tone.

He is one of the top players of Aliea Gakuen, Diamond Dust's captain and forward. He first appeared when Epsilon Kai lost to Raimon and exiles Desarm and the Epsilon team. He seemed to be intrigued by Endou and challenges him to one match. To force Raimon to play, Suzuno threatened to destroy Tokyo with his black and blue footballs. However, the match wasn't as easy as Suzuno imagined, and despite making two goals using Northern Impact, his last attempt was stopped by Endous's incomplete Megaton Head. He was seen stroking his hair after becoming irritated during the match, and was shocked and almost couldn't speak during the meeting with Gran and Burn after the match.

Later on, he joined forces with Burn to create the strongest team, Chaos. During the match against Raimon he made a great quantity of goals against the unfinished Mugen The Hand. Though later it was stopped after Tachimukai completely mastered Mugen The Hand. He then shows his combination hissatsu with Burn, called Fire Blizzard, which broke through Mugen The Hand.

He reappeared in Inazuma Eleven Ares no Tenbin as a forward for Eisei Gakuen. He played in the match against Inakuni Raimon in the Football Frontier and his team lost 6-5.

He appeared during the meeting with Hiroto, Tatsuya and Saginuma before they left to Russia for the FFI tournament. The team gathered to welcome their teammates with all due respect and praise them for what they've already achieved.

You must first defeat his team, Diamond Dust at the Fuji Forest. Then, select him in the machine and he'll be somewhere in the forest. Take Fubuki with you, and he'll challenge you into 2 battles.

You must defeat Fire Dragon on Hirai Shinzou's taisen route to recruit him. Select him in the machine and Suzuno will appear left of Toramaru's home (Not in Liocott Island Area). You have to fight Suzuno 3 times before he joins you.

In order to recruit Gazel, Dragonlink has to be defeated first in the story mode. Also, the following requirements are needed:

In order to recruit Gazel, the following requirements are needed:

After this, he can be scouted for an amount of 3400 Kizuna points.

In order to recruit Gazel, the following requirements are needed: 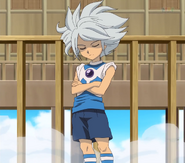 Suzuno Fuusuke's Character design.
Add a photo to this gallery

Retrieved from "https://inazuma-eleven.fandom.com/wiki/Suzuno_Fuusuke?oldid=837529"
Community content is available under CC-BY-SA unless otherwise noted.