Tao Lu is in average height and slight. She has red hair with bun, fringe that falls on the left side of her face and two long bangs on both sides of head. She has dark purple eyes with black circles, thin eyebrows, big eyelashes and brown mouth.

Six years prior the events of Inazuma Eleven Orion no Kokuin, Tao Lu played for Shanghai Hoshinekodan against Rojiura Shounentai in the final of a Chinese junior soccer tournament. As stated by Li Hao she, along with her teammates, hailed from a wealthy family and received a special, renowed soccer education. At some point during the match, Lu managed to steal the ball from Li Hao, advancing to the opposite half of the field. She was then cornered by an adversary, which stole the ball from her. Luckily, the pass was intercepted by Zhou Xing. Despite a well-played match and better training, at the end her team tied with a score of 2-2, due Li's goal a few seconds from the end of the match.

She was a member of Soccer Zatsugidan.  During the match between Inazuma Japan and Soccer Acrobatic Troupe, she nimbly stole the ball from Inamori Asuto by waving her arms, then doing a backflip, catching the ball between her feet. She was able to maintain good control of the ball and her passes in handstand position. 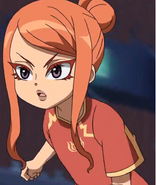 Retrieved from "https://inazuma-eleven.fandom.com/wiki/Tao_Lu?oldid=822201"
Community content is available under CC-BY-SA unless otherwise noted.