After 40 years of uncontestable domination in the Football Frontier, Teikoku has lost his superb. This is the consequence of their eliminations against Raimon and Zeus in the past year Football Frontier, but also because of the 10-0 loss against Seishou Gakuen in a friendly. Seishou stole them the officious crown of Japan's number one team.

Even though, the team is considered as one of the favourites for the Football Frontier. After their defeat against Seishou Gakuen, all of Teikoku's friendlies had been at home, and disputed behind closed doors, with a win of Teikoku at every match. Afterwards, all of teams that faced Teikoku lost all of their following matches, making Teikoku feared by Inakuni Raimon notably.

After Kidou Yuuto's departure, Sakuma Jirou became the new captain. Teikoku got stronger thanks to the arrivals of Kazemaru Ichirouta as a reinforcement member and Fudou Akio. Kageyama Reiji's return, who is back as head coach after Midouin freed him, has united all members of Teikoku against him because of his past actions. This has strengthened the members of Teikoku by uniting their minds and their collective play. Kazemaru is the only one who obeys to Kageyama's orders at 100% because he know all Kageyama's plans before the other members of the team.

The uniforms are similar to the ones worn by the original Teikoku Gakuen , but with their sponsor on the front of the shirts that reads "KIDO". 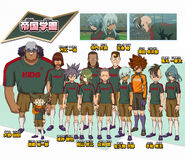 Teikoku Gakuen in Inazuma Eleven SD.
Add a photo to this gallery

Retrieved from "https://inazuma-eleven.fandom.com/wiki/Teikoku_Gakuen_(Ares)?oldid=842243"
Community content is available under CC-BY-SA unless otherwise noted.