In the Inazuma Eleven 2 game, they can be rematched in Furukabu's top-right taisen route as the fifth team at around level 65.

In the 3rd game, they're found in the robot's route beneath the soccer club building as the fourth team on the lower route.

In the Inazuma Eleven GO game, they're fought as the second team in Yuuka's bottom route. All the members are around level 62.

In the Chrono Stone game, they're found in Furukabu's route as the second team at level 99.

They can be found in the Galaxy games in both Fuyukai Suguru's right route at level 62, or Raimon Natsumi's route at level 99. They're the second team for both routes.

The male team jerseys are white jumpsuits going all the way down to the feet, with dark grey collars, white gloves, and they wear a beige colored belt around the waist.Around the thigh all the way down to the end of the knees is black in color, and their cleats (or rather boots) are white with a dark grey toe cap. The female team jerseys have got not much of a difference, but the area below the torso is colored grey but in the male version it is light grey. The limiter release buttons for the guys are on the side, and the limiter release for the girls are in the middle of the chest. The goalkeeper uniform is purple instead of white, and gloves are dark purple. Gran possesses the captain's band, which is blue in color and is very loose.

The Genesis' formation in the game. 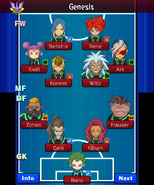 The Genesis' formation in the GO game. 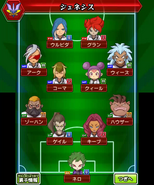 The Genesis' formation in the CS game. 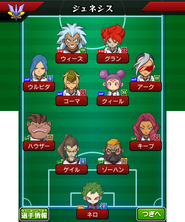 The Genesis' formation in the Galaxy game.

The Genesis in the ending credits

The Genesis' heads
Add a photo to this gallery

The Genesis Vs. Raimon

In their first match against Raimon, they scored 20-0, beating Raimon severely, because of fear towards them, Kazemaru, left the team, (although in the game, they attacked him because his speed was a threat) Fubuki was also injured badly due to the imbalance of his double personalities. In their second match, they lost to Raimon with a score of 3-4, due to Fubuki's Wolf Legend, Endou, Domon, and Kidou's Death Zone 2, Fubuki and Gouenji's Crossfire and a score with The Earth. Right after their match, their "father" was arrested and the team was disbanded, along with the other Aliea Gakuen teams.

Retrieved from "https://inazuma-eleven.fandom.com/wiki/The_Genesis?oldid=846685"
Community content is available under CC-BY-SA unless otherwise noted.