Toramaru first used this technique during the match between Inazuma Japan and Desert Lion. He didn't want to use his technique at first because he was afraid he would be left behind but Gouenji Shuuya helped him. He then used it to score the winning goal for Inazuma Japan, breaking through Nasser Mustafa's Storm Rider.

Later, it was used in a training, but Endou was able to block it with Seigi no Tekken G5. It is also used in episode 95 in the match against The Empire but failed due to Teres Tolue's Iron Wall.

Toramaru used Tiger Drive during the match against Ogre where it combined it with Gouenji's Maximum Fire to create a shoot chain. Their ahoot chain was able to break through Zagomel Zande's Needle Hammer, scoring the first goal for Raimon.

The user summons a tiger by stomping down their right foot which lifts the ball off the ground, jumps and then shoots. The tiger chases the ball and then roars, powering up the shoot. 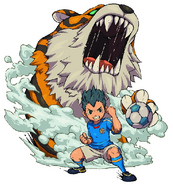 Tiger Drive's artwork of the game.

Tiger Drive in the game.

Tiger Drive in the TCG.