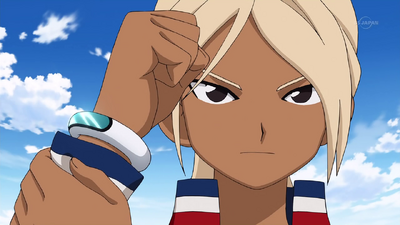 The Time Bracelet (タイムブレスレット, Taimu Buresuretto; dub: Time Band) is a bracelet worn by Tsurugi Yuuichi and Gouenji Shuuya, that appeared in Inazuma Eleven GO Chrono Stone. It can allow its user to travel through time and protect himself from time paradoxs.

It first appeared in the episode 3. Tsurugi Yuuichi used it to travel through time. It was given to him by an unknown man who saved him in the past, saying that he'll help people that love soccer.

It appeared again in the episode 7, worn by Gouenji Shuuya. He told Raimon he knew what had happened to Endou and showed them the match against Protocol Omega 2.0. He said he was given that Time Bracelet by Helper X, which Gouenji had already heard about, as that person had financially helped the Fifth Sector before, when Gouenji was still the Holy Emperor. In return of, Fifth Sector looked for children with a huge potential, called Second Stage Children. He finished by saying Matsukaze Tenma apparently was one of them.

Retrieved from "https://inazuma-eleven.fandom.com/wiki/Time_Bracelet?oldid=736496"
Community content is available under CC-BY-SA unless otherwise noted.