Todoroki Denjirou ( ) is the chairman of the Japanese Soccer Association.

He is very tall man, broad-shouldered. He has long grey hair with long single strand which falls on the right side of his head. He has bushy eyebrows, short bread, big curved nose and brown eyes. He wears dark grey suit with light blue shirt and blue tie.

He seemed to be very serious person but he gets excited very quickly, he deeply believes in people skills.

He met with Raimon after their friendly match against the Spanish youth league team Barcelona Orb. During this match it turned out that the Spanish players were much better than Raimon. All attempts to make a shot were easily stopped by the opponent players, even without using any hissatsu technique or tactic. Raimon lost with 13 goals. Todoroki was the chairman of the Japan Youth Soccer Associaton. Although Raimon lost, he wasn't disappointed. He said that this match was meaningful and showed on what level was the Japanese soccer in comparison with the rest of the world. He stated that Japanese soccer must improve to be able to stand against the world players. Because Raimon was the national champion, they should now take responsibility for it. Due to this, the team would be temporarily disbanded and students as a members of reinforcement committee, would attend other schools and football clubs throughout Japan to make them stronger and spread the spirit of Raimon among them.

He was seen before the final match between Inakuni Raimon and Outei Tsukinomiya started. Later in his office he was talking with his assistant about the list with the names of Inazuma Japan members chosen by coach Zhao Jinyun. He was very excited and couldn't wait for the day when Inazuma Japan would face the world.

He was seen watching the first match in Asia FFI preliminaries between Inazuma Japan and Red Bison. He told them to give their best and show the whole world the skills of Japanese players. 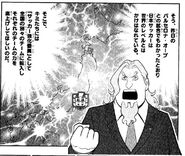 Todoroki in the Inazuma Eleven Reloaded's manga adaption
Add a photo to this gallery
Retrieved from "https://inazuma-eleven.fandom.com/wiki/Todoroki_Denjirou?oldid=815082"
Community content is available under CC-BY-SA unless otherwise noted.