Zeus (, Zeusu) is a team that played against Raimon in the final of the Football Frontier. They lost with a score of 4-3.

In Inazuma Eleven the Movie, they were defeated by Ogre in the Football Frontier semi-finals, who led with a score of 36-0 at the end of the match. As a result, they didn't play Raimon in the final.

They appear as the first team in Yuuka's bottom route. All the members are around level 60.

Their team jersey consists of a white t-shirt, with blue stripes around the collar and sleeves of their shirts, white pants with black cycling pants underneath, and white arm bands with blue stripes on the edges. Some of the members wear a white sash along with the jersey (imitating a Greek tunic), some do not. Their socks are periwinkle color, and their cleats are dark blue in color with white accents. The goalkeeper uniform is dark brown, with dark purple sleeves, a white collar with black stripes around the collar and sleeves, cream arm bands with black stripes, grey gloves and light purple shorts. The captain's band is green.

The alternate uniform of Zeus, which is also the uniform for Ura Zeus is black (purple-grey in the wii game) instead of white, with red stripes instead of blue stripes. The goalkeeper uniform is dark purple, with black sleeves, a white collar with black stripes around the collar and sleeves, grey bands with black stripes, white gloves and dark blue shorts.

Not much is known about this match, other than the fact that Zeus had scored 10 goals in the match, whereas Teikoku barely scored any. It is also known that the Teikoku members, excluding Kidou Yuuto were placed in the Inazuma General Hospital after the match. The goal post was completely destroyed due to the extreme power of the shoots.

In the movie, Zeus faces Ogre, which arrived from the future and replaced Carribian Junior High. They were heavily beaten by Ogre with a score of 36-0. In the first half, Zeus lost 11 points and in the second half, 25 points.

In the match against Raimon, Zeus scored all their three goals in the first half of the match with God Knows, Reflect Buster, and Divine Arrow. Towards the second half, Raimon began to strike back, and scored 4 goals against Zeus using a combination of Fire Tornado and Twin Boost three times to get their first 3 goals beating Tsunami Wall and Gigant Wall, and their last goal was scored using a combination of Fire Tornado and The Phoenix. In the end, Zeus lost to Raimon by one point. 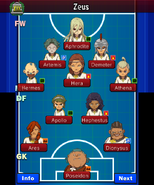 Zeus' formation in the GO game. 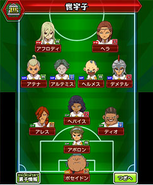 Zeus in the CS game.

Zeus in the ending credits

Retrieved from "https://inazuma-eleven.fandom.com/wiki/Zeus?oldid=846897"
Community content is available under CC-BY-SA unless otherwise noted.