Zhou Xing (チャウ・シン, Chau Shin) is a midfielder and the captain of Shanghai Hoshinekodan and Soccer Zatsugidan.

Zhou has blue eyes and "winged" hair that is slicked up on the sides. A few strips of hair also hang downwards, partially covering his eyes and face. The color of his hair and eyebrows alternates between purple, gray and blue. He also has fair skin.

During Li Hao's flashback to the past, Zhou Xing is shown to be a friendly and amusing person. However, during the match between Inazuma Japan and Soccer Zatsugidan, he seems to be a rather serious and competitive person.

Zhou appeared for the first time during the final match in the Chinese junior soccer tournament, as the captain of the Shanghai Hoshinekodan. The team played against Rojiura Shounentai, which members were the children living at the streets and trained for some time by Zhao Jinyun. Now Zhao was the coach of Shanghai Hoshinekodan, which members according to Li Hao’s words, learned soccer by paying loads on a gifted education program. Just after the beginning of the match Li moved forwards to the opponent's goal but Tao Lu steal the ball from him. When later Tan Tanmin outsmarted her and wanted to kick to Wu Longchi, Zhou intercepted his pass. He clashed together with Li, fighting for the ball. After the match ended with a tie 2-2, Li and Zhou were lying on the field, talking and staring at the clear sky and stars.

Six years later they played together at the FFI tournament in a Soccer Zatsugidan. At the beginning of the match against Inazuma Japan, Japan's players came to Chinese team, when they recognized their coach as Zhao Jinyun and confronted him. Chinese players looked at them with a smile, as if they were friendly but a little bit mocking. When the match began China overwhelmed Inazuma Japan with their unusual moves and tricks, passing the ball using their feet and doing handstand. They quickly used their tactic Banri no Choujou and scored the first goal with Li Hao's shot Tenkuu Hayabusadan. Using the same strategy later, they had a lead of 2 points. All their next attempts to shoot failed because of Nosaka Yuuma’s defense, who protected the goal until Endou Mamoru, Nishikage Seiya and Saginuma Osamu combined their powers into one mighty hissatsu The Asura, which blocked Li Hao's shots. Running next to Li, Zhou said that they would show Inazuma Japan that acrobatics wasn't the only what they knew. Right after that China used their new tactic Shourinji Kousoku Juuhachijin which created an optical illusion and completely disoriented Japan's team with the enormous number of Chinese players. Zhou easily outsmarted Haizaki Ryouhei, stealing the ball from him and passing it further. China once again used Banri no Choujou, which was successfully blocked with the three Japan's goalkeepers.

During the break Zhou was looking at Inazuma Japan and stated that they shouldn't be cocky just because they managed to stop them. Li told him that it would be Chinese team who would win this match. When Zhou saw Goujin Tetsunosuke entering the field, he said disrespectfully that reserve player like him wouldn't change anything in this match. Li Hao warned him that Goujin was strong enough and he shouldn't be underestimated, stating that they should use all their power as well. Immediately after China initiated again their tactic Shourinji Kousoku Juuhachijin and Zhou managed to steal the ball from confused Goujin. They didn't take advantage for a long time, when Inamori Asuto used his Inabikari Dash to mark Zhou and broke their strategy. After that Goujin scored the first goal for Japan, using his new technique Fire Lemonade Rising. The power and strength of this shot, astonished both Japan and Chinese team.

Later China used their new tactic Minna de Jiangshi thanks which they could block Japan's players way, no matter in what direction they moved. He passed the ball to Li who initiated another tactic Mouko Shuurai which let them get through the Japan's defense. Although they managed to shot again, the three goalkeepers one more time stopped them. While playing Zhou reminded his past when he thought that he could have easily whatever he wanted. But after Zhou played with Rojiura Shounentai he found out that trying more and making an efforts to gain something, he could change himself. Later running towards the Japan's goal Zhou stated that they would protect soccer and win this match. When they blocked Inazuma Japan again with their tactic Minna, thanks to Nosaka Japan's players tricked China and Ichihoshi run away with the ball, passing it to Fudou Akio who tied 2-2.

When China used again Mouko Shuurai Inazuma Japan responded with new tactic The General and the ball was stolen from Zhou by Kiyama Tatsuya. Even Minna de Jiangshi wasn't more useful in the face of the new opponent's skills. Goujin took the ball and passed it to Haizaki who scored later with his new technique Shark The Deep. At the end Zhou and Li, exceeding their limits, shot last time with Tenhou Chiretsu Zhou thought about his former match with Li, trainings with Zhao and becoming the representative of China, when Zhao gave them their new uniforms. Their shot was blocked in total by 6 Japan's players. When the match ended, Zhou fell on the field completely exhausted but happy and satisfied after playing a good game. Asuto thanked them for a match, they were smiling and joking like good friends and promised to play again one day. Later the whole Chinese team gathered around Zhao, sad about losing their chance to be China star. Zhao cheered them up, proving them that they already became a star and were supported by their fans. Zhou stated that now they would leave the fight with Orion in Japan's hands. Later they decided to go for a dinner, before they returned to China. 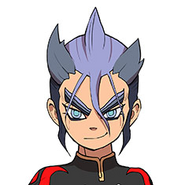 Retrieved from "https://inazuma-eleven.fandom.com/wiki/Zhou_Xing?oldid=829662"
Community content is available under CC-BY-SA unless otherwise noted.